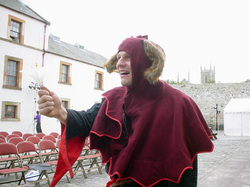 Howard studied English and Drama as an undergraduate at Exeter University, (where he also later studied The History of Western Esotericism as a graduate student). He trained in physical theatre at the Desmond Jones School in London. In addition to performing with Ophaboom and directing most of Ophaboom's shows, Howard has directed shows for other companies in the U.K. and abroad. He's created puppet shows for The Little Angel Theatre in London, performed in shows for both the Little Angel and Puppet Theatre Norwich, and has directed Commedia and children's theatre for the ESMAE Theatre School in Porto, Portugal. He appeared in the video for "Running" by the Stereo MC's, has performed with musical groups ranging Daughters of Elvin to The Nosy Crows, and (Tolkien buffs might be interested in knowing) was the model for the Alan Lee painting on the cover of Tolkien's The Children of Hurin.) Howard has written articles on drama, masks, and myth for various journals and magazines; and a graphic novel, John Barleycorn Must Die, with artist Rex Van Ryn. After many years of living in London (when not traveling the world with Ophaboom), he settled in a small arts community on the edge of Dartmoor. 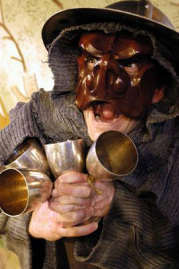 Geoff trained intensively with Desmond Jones, Antonio Fava, and Carlo Boso, all of whom specialise in physical theatre and Commedia dell' Arte. He has also studied with Complicite, Monika Pagneau, Philippe Gaulier, and Theatre de Soleil. In addition to performing with Ophaboom, Geoff has worked with a number of other companies, including the children's theatre company Kazzum. He has appeared in wide variety of roles in film and television, was Patrick Stewart's flying double in Christmas Carol, and performs with the Secret Cinema events group in London. Geoff is also well known as one of the U.K.'s principal teachers of Commedia dell'Arte, physical theatre, mask work & movement. He is a regular teacher at East 15 theatre school in London, and  teaches in both the U.K. and abroad, with students ranging from university-level drama students to professional performers. He is also a writer, currently working on a series of fantasy novels. Geoff lives in London.